You know how people say “I can’t even?” (and it drives you nuts?)

With the book The Boys in the Boat I literally can’t even. I can’t. It’s that. good.

I have a running list of books that I’ve dubbed the “You Make Me Glad I’m a Writer and Inspire Me and Make Me Happy Even Reading You for the Thirtieth Time” books. (I don’t add to this list often. In fact, I haven’t added to it since I read the Harry Potter series in middle school. Because, Harry Potter. How do you top Harry?)

But The Boys in the Boat made the list. Swimmingly. (Am I punny?! Get it? Water? Boats? Bueller?) 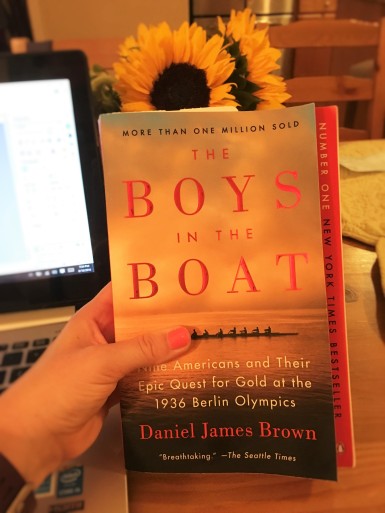 In all seriousness, The Boys in the Boat, written by Daniel James Brown, is the best of both worlds: a nonfiction book that reads brilliantly like page-turning fiction. It’s the true story of nine young men who come together to form the 1936 American Olympic rowing team – and in so doing, they defy most every odd you can imagine. The story largely follows one boy in particular – Joe Rantz – who rises up in the face of the 1930’s American Depression, joblessness, loss, poverty, and even homelessness to get into college, join the rowing team, and pay his own way. Rantz and his fellow oarsmen pull together to not only beat the favored East Coast elite rowing teams, but also to compete in the 1936 Berlin Olympics, showing Adolf Hitler and the Nazis what true heart and American grit really look like.

Basically, if you want to be inspired and feel an authentic patriotic tug at your heartstrings (don’t we all right about now?) while also reading articulate and honest writing – you’ll very much enjoy this read.

The #pitchwars agent showcase is just about two weeks away, which means I’m feeling lots of jitters and not just from the coffee 🤪 But mostly I’m SO EXCITED to introduce my beloved MC to the world. I pretty much let her drive the story, and that made it so much fun to write. My mentors @julieabebooks and @sarahaelisuk created this lovely, cozy aesthetic for the manuscript and it’s such a perfect preview of the words to come ✨☀️🌛🌸📚🎶🍬🌟
I was STUCK - the kind of stuck where I stared at the computer screen, mouth slightly open, quite possibly drooling, with one hand on a cup of coffee that’d gotten cold because just those COUPLE sentences I needed wouldn’t surface in my brain - so, despite my wing 3 tendencies to push through and “just accomplish something,” I took a few minutes to color (to the Downton Abbey soundtrack, of course, as one does 👑). . After coloring for a bit, I came back to my WIP and sailed through the revisions where I’d been stuck. Man. Thankful for colors and pretty things and of course for Lady Mary’s glittery wardrobe ✨ . @exhale.creativity #kickstartourcreativity #exhalecreativity #creativitymatters #writingcommunity #creativityeveryday #amwriting
#pitchwars interviewed all the mentees and mentors, and here I explain a little bit about the book I somehow wrote in Baby Boy’s foggy newborn days 💙✨Also, you can read all about my mentors, @sarahaelisuk and @julieabebooks !! They’re extremely talented writers and wonderfully kind humans. Keep an eye out for their books, debuting soon 🎉
Oh my goodness. I’ve truly thought I’m not a person who cries at the ending of books, but Wendell Berry’s “Hannah Coulter” has proved me wrong. Perhaps I just hadn’t been reading the right books lately ✨ . But ohhhh, this one. It is a slower read, but gosh, it’s beautiful. Everything about it. The story doesn’t need drama because it understands that human nature creates its own. It’s an ode to ordinary moments, to being present, to the sacred space of nature, to being together, to the hope of eternity. So glad @sarahwanders recommended this in #bookgirl ❤️
2nd revisions pass ➡️ let’s do this. 💪✨ #pitchwars #amrevising #amwriting
My goodness - a year changes so quickly. Looking back over my 2019 goal sheets, I started this year totally focused on nursing my babe who was just starting to sit on his own. I’m ending this year chasing that same babe-turned-toddler all around the house while he steals my goldfish. And somewhere in between, I wrote the book I’m now revising and went through the refining fires of emotional healing after the traumatic labor. . I’ve done a lot this year, and if I hadn’t taken the time to look back and celebrate the good, I honestly think I’d forget all of it. . Remembering & moving forward into this next year go hand-in-hand. I’d love to know what you most remember from 2019 💖